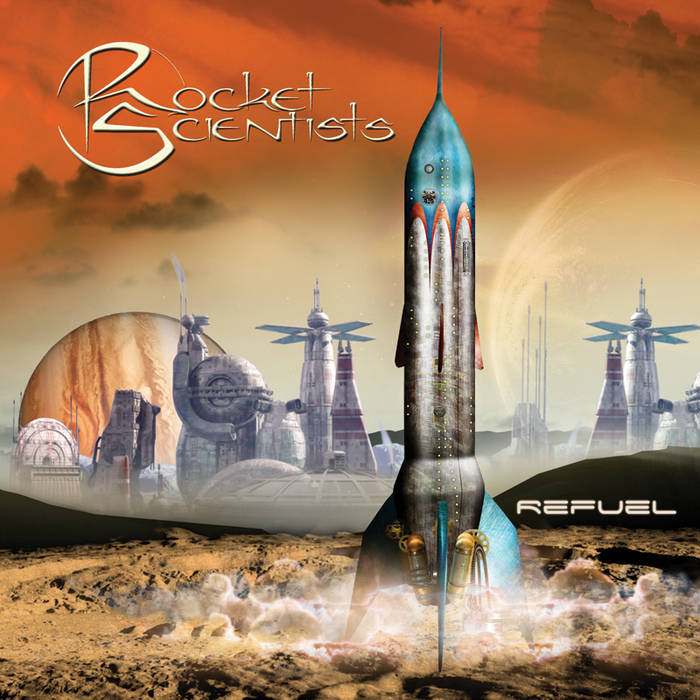 Refuel started in 2012 with the idea of marking the band's 20th anniversary of their 1993 debut release. Producer / keyboardist Erik Norlander notes, "We decided to write some new music at the end of 2012 to celebrate 20 years of Rocket Scientists. We wrote a lot. Too much, in fact, for a single album!" The band released a 30-minute all-instrumental EP, Supernatural Highways, earlier this year which represents the first part of those creative efforts. Refuel contains the balance of those 20-year anniversary recordings and is a more traditional album mixing vocal and instrumental tracks in the style that so identifies the group. A video for "She's Getting Hysterical" will closely follow the Refuel release.

Guitarist / vocalist Mark McCrite takes his craft to new heights on the Refuel album. Says vocalist Lana Lane, "Mark is one of the most musical people I know, and Rocket Scientists wouldn't exist without him. He is always up for the challenge of creating meaningful music and delivers incredible work. The songs he has contributed over the past 20 years to both the Rocket Scientists and Lana Lane catalogs are definitely some of the most memorable."

Keyboardist Erik Norlander turns in another production full of depth and color. Don Schiff comments, "Erik is a never-ending source of master keyboard wizardry. His tones are the best, and his choice of harmony is flawless. As for his keyboard technique, it's the stuff of the timeless legends that we know and love." Norlander's keyboard work especially shines on the instrumental, "Galileo," keeping alive the RS tradition of naming an instrumental track after a famous scientist. Norlander was even persuaded to step out with more vocals to the Refuel effort. Mark McCrite notes, "I'm really excited to have Erik return more prominently as a lead vocalist this time out. This was an important element of our first album, Earthbound, and I'm happy to see it come back!"

Don Schiff performs his usual Stick and bass guitar magic in addition to penning 2 of the album tracks, "Regenerate" and "Reconstruct." He also plays contrabass, cello and viola throughout the record. Norlander comments, "In the few years since the Rocket Scientists Looking Backward project, Don taught himself to play the cello! He had been experimenting with various bowed guitar-like instruments on the Hommage Symphonique album and even on the last 2007 studio recordings like "Earthbound." Those sounded great, but I think Don decided that he needed to learn the real thing … and he did!" Schiff's cello is prominent on the 26-minute opus, "Traveler on the Supernatural Highways," released earlier this year, and the Refuel album takes his string-player role even further on nearly every song.

Guest vocalists on Refuel include symphonic rock chanteuse, Lana Lane, and long-time Norlander collaborator, rock icon, Kelly Keeling. Mark McCrite notes, "It's also great to feature the inimitable Lana Lane. Singing at the same mic with her was one of the highlights of these sessions, and I love that our signature blend is featured as the very first vocals you hear on the record." And Don Schiff adds, "Kelly's vocals embody all the characteristics of legendary vocalists in style, power and control. On top of all that he also is 'Kelly Keeling,' a legendary voice on his own. It's always a great pleasure to hear his artistry." Keeling provides guest vocals to the horn-driven anthem, "Cheshire Cat Smile," and Lane concludes with album with a stirring delivery of the symphonic gem, "The Lost Years."